Iconostasis Installed in Its New Home

As some of you who attend church regularly have already noted, our new iconostasis has been installed in place of the old one and continues to amaze and awe those of us who have been waiting for it to take its place in the church for so many years. Of course, it is not yet completely finished as it is lacking the many icons that will eventually become a part of it as well as the additional decorative work necessary to complete the full design. The work continues, and we are all concentrating on having everything completed and in place in time for the full Consecration of our church on July 11 of next year.

The initial phase of the installation began with the “demolition,” which was completed fully and very quickly with the help of our brothers and some good friends of the parish. Father Alexander Krassovsky has repeatedly thanked all of those who helped out at all stages of the installation, but wanted to particularly mention those who labored at his side for several hard and difficult days. He especially expressed his deepest gratitude to Father Athanasius Ferguson, John Poluektov, Alexander Litvinenko. Alexei Khlopoff, Misha Mogilev Sr., Misha Mogilev Jr., Daniel Alva, Daniel Judd, John Reighard, and our indefatigable Starosta, Paul Johnson, with special thanks to friends of the parish Wedge Roquemore, Sergei Bogatsky, and Dima Shikaloff.

Happily, the “demolition” phase was not really a demolition. Our old iconostas (which had served in the church of St. Joasaph in Brooklyn prior to its arrival at Sts. Peter and Paul) was utilized by our church for many years and has been the backdrop for our Easter services, baptisms, weddings, and funerals. This iconostas has served us well and bears the spirit of our many prayers recited often and with faith over a generation. No longer needed, it was carefully and lovingly taken apart, packed, and transported by Father Alexander, Anya, and their son Alyosha to Southern California, where it has already been installed in the church Alyosha attends in Irvine.

Paul Johnson coordinated and arranged for the work that needed to be done prior to the installation, and all work was duly completed in time for our friends from Greece to arrive to finish the job. Two of the three artisans arrived on time and worked alongside our brothers carrying, lifting, securing, and adjusting the many pieces that constitute the iconostas. At times, the job was physically demanding and difficult, as some of the pieces were heavy and required climbing up the scaffolding, lifting enormous weights, and carefully installing each piece in its allotted space. By the Grace of God, the installation went well and was actually completed ahead of schedule. However, it became apparent that the complexity of the job did contribute to some problems, which Father Alexander and “the boys” are now trying to correct.

The iconostasis was designed by architects at CJK Sacred Space Architects in collaboration with Father Alexander. Christos Kamages is the head of this company in Marin County, which specializes in building Orthodox churches and interiors. Working from Fr. Alexander’s specifications, the iconostasis was constructed in Greece on the island of Crete, shipped to the United States, and assembled by a team who struggled mightily to understand each other. None of us have any knowledge of Greek, and the artisans spoke only elementary words of English. Some of the problems were evident in discrepancies between the design and its execution, and the language barrier made problem-solving more difficult. The problems are now being corrected by the nimble brains of those who participated in the work with a great deal of help from Zelco Cecic-Karusek, whose flawless cabinetry graces our candle counter kiosk and serves as a showcase for the religious gift items on sale there. With God’s help, we hope to have all the problems corrected soon, and in the meantime, the work to make necessary repairs to the church and hall is coming along as well.

The new iconostasis is an impressive and glorious work of art, and it is humbling for those of us on the Parish Council to have been a small part of its creation. It is also a joy for those who participated in its funding to see the results of their hard and intense labors.

During our pre-Christmas Bazaar on November 9 and 10, this beautiful addition to our church was viewed by many people for the first time, and its significance duly explained by Fr. Alexander and Fr. Afanassy in their docent tours. 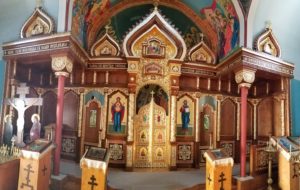 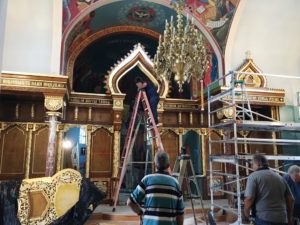